Denon DJ have been busy bees behind the scenes, as today we get to enjoy the latest Version of their Engine Prime music management software. Engine Prime v1.2 adds awesome new features to Denon DJ’s analysis software – entirely new and written from the ground up. If you’re looking at joining the SC5000 club, the Engine Prime software performs tasks to optimise and enhance your experience and features. You can bring crates, playlists and folders over from other file management software like iTunes, Serato and Traktor (more on this below!)….

e Denon DJ people have worked with the Native Instruments people, meaning you can now drop Traktor playlists and associated data such as cue points and saved loops directly into engine. For Serato users, you can now also drop a serato crate straight into engine, too!

So those are the new importing features, what about export?

You can now export playlists and folders in CSV, M3U and JSON file formats – this makes life easy when you need a comprehensive track list sent anywhere beyond the Engine Prime software.

Engine Prime and SC5000 has a BPM range of 98 – 198 for accurate speed detection especially with faster genres such as Drum and Bass. Another great update is an improved downbeat detection algorithm – so the analysis of your track grid, mainly on those downtempo Hip Hop, trap tunes etc have a much more accurate grid.

You get two new user preference options, first of those being the Sync button action. This nifty option allows you to choose whether you need to press the shift button whilst switching sync on and off. The second new user preference is the on air mode toggle. On air mode basically changes the colour of the rings on the platter when putting a fader up on the Prime mixer. Toggling this off means the designated player colour remains solid throughout performance.

The v1.2 update also brings a welcomed enhancement to the network feature; previously you couldn’t have more than 2.5GB of data sent through the network to other players (or via X1800 mixer); this is now unlimited, so even the biggest music libraries can be seen across any players connected to your network. 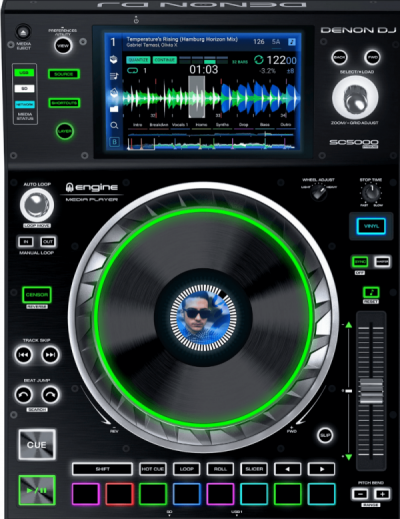 Instant doubles is the ability to duplicate the playing track onto another deck, at the same time point and speed. The SC5000 instant doubles feature can be accessed by going to your desired deck or layer, then double tap the scroller. You can also access instant doubles by pressing and holding the sync button for 2 seconds.

Both Engine Prime and SC5000 allow you to sort both crates and playlists in many different orders, including date added, artist, track title, key and BPM.

The SC5000 now allows you to create a loop before the track has been analysed – this also applies to setting a cue point before the track has been analysed – handy! Loops can now be triggered on beat by simply hitting quantise then trigger loop. Loops can also be set from the initial cue point by hitting loop out. Loops now auto-disable when you press a hot cue outside your current loop region; a useful feature which helps avoid the risk of falling back into a loop by accident.

So there we have it – the Denon Elves have been hard at work to make V1.2 the most exciting update yet. Let us know your thoughts – what else do you want within Engine Prime? Whats your favourite feature on the SC5000? Comment below!