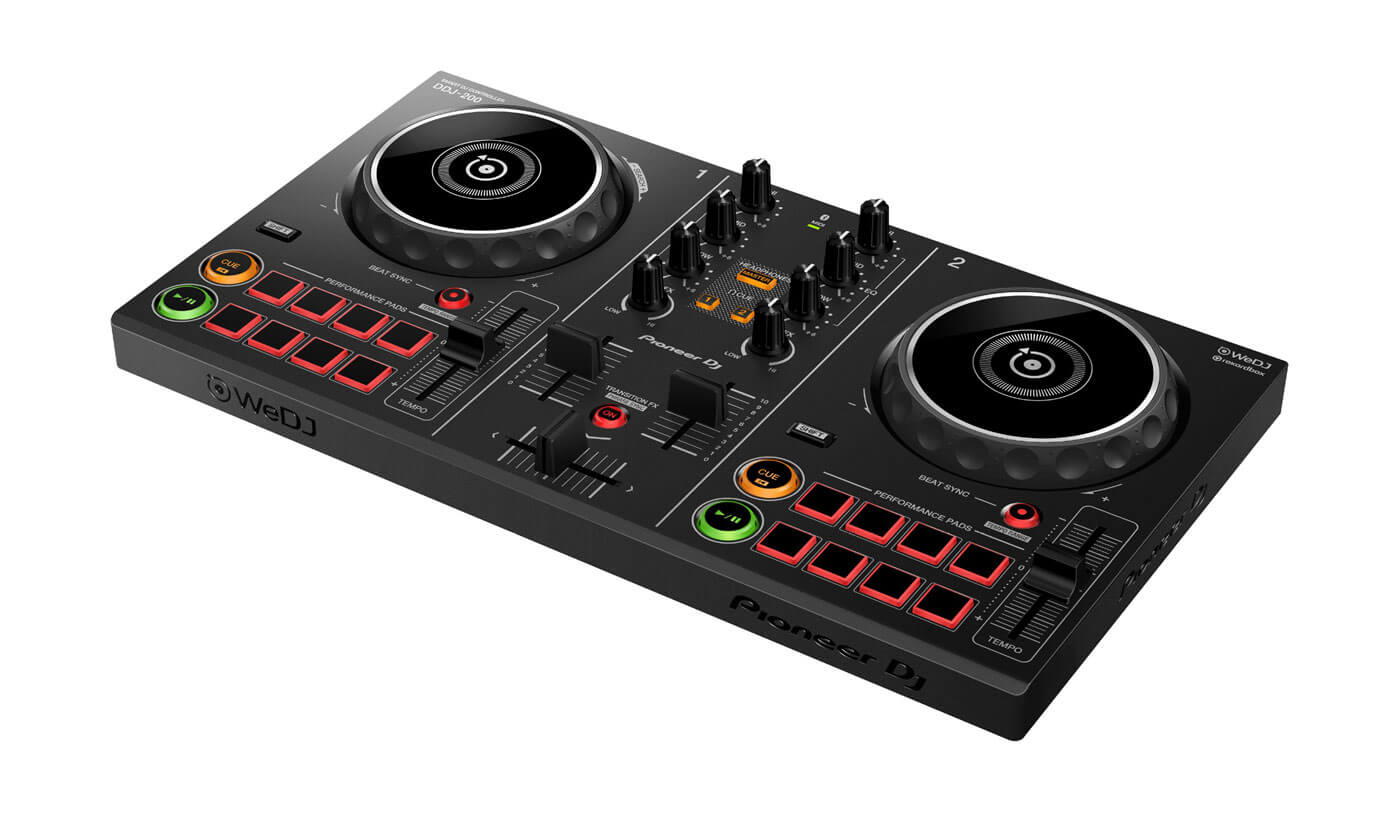 If you’re looking for the best DJ controller for beginners, look no further than the all new Pioneer DDJ-200.

Based on their existing family of controllers like the DDJ-400 and DDJ-800, the new DDJ200 has the familiar layout, in a more compact form factor.

The more eagle eyed readers will notice there are no audio connections, this is because the DDJ200 doesn’t have a sound card, it is purely a controller. The clever part is how it connects and controls your software. To connect to a computer it uses a regular USB a-b cable and controls Rekordbox DJ which is included. That’s right, for £139 you get the DDJ200 controller and software worth £90!

So what’s so clever about the DDJ200? It connects to an iPhone via bluetooth to control the FREE WeDJ 2 app. Don’t worry non-Apple users, the Android version is coming in July. At the time of writing there’s no news about an iPad version of the app.

So you’ve paired the DDJ-200 to your phone, what next?

Well, there are a couple of options.

You can simply stream the master output via bluetooth to your home speakers and forget about cueing through headphones. This isn’t as crazy as it sounds with syncing and quantised mixing these days.

Alternatively, you can use the included splitter cable to use the headphone output (if you have one, dongle required if you don’t) and have the master signal going out of one output and the headphone cue out of the other.

When wirelessly controlling your phone, the DDJ-200 can be powered by a battery pack or from a USB wall charger.

Recently, the main issue faced by newer DJ’s is how to source music. With streaming services being the main method of obtaining tracks, the DJ software companies have been trying to cut through the red tape of licensing and royalty rules. One such company has been Algoriddim with their top selling DJay app which connects to a premium Spotify account to let you play millions of songs (providing you have an internet connection).

Now DJ’s have BeatportLink, a similar service with DJs as the target users.

Why am I telling you all this? Well the DDJ-200 works with DJay and WeDJ apps. DJay will give you Spotify access and WeDJ will connect to BeatportLink. Other apps like edjing will also work with the DDJ200 and connects to premium service Deezer. RekordBox DJ will also support BeatportLink in the near future.

To summarise, the Pioneer DDJ-200 is a compact, capable controller with wireless connection to an iPhone and includes Rekordbox DJ for computer use. It’s a ‘no brainer’ for the beginner DJ and also great as a backup controller.

The DDJ-200 is also a great way in to the Pioneer Rekordbox eco-system where all these cue points, loops and playlists will follow you through your path as a DJ.