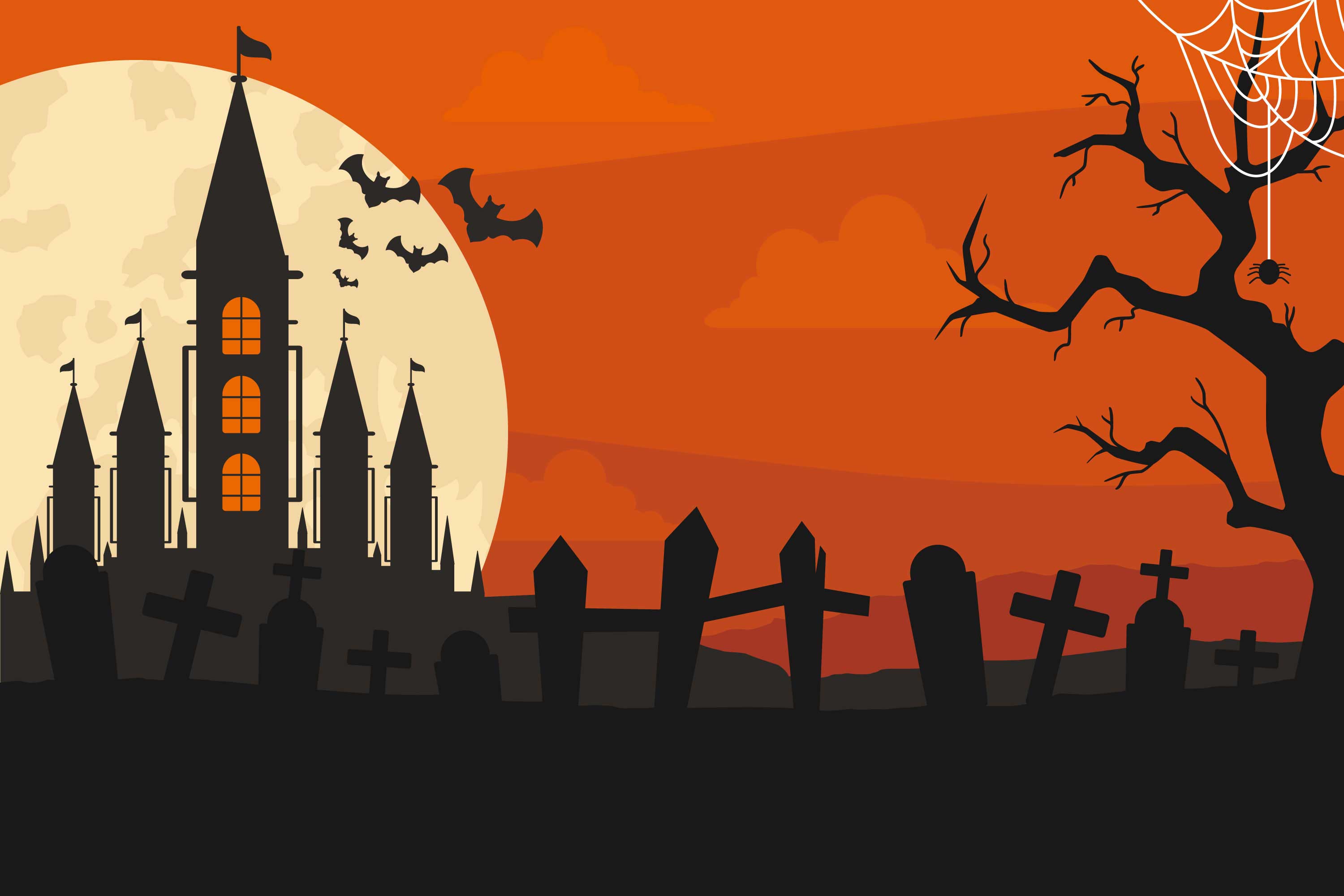 The time is nearly upon us to embrace the SPIRIT of Halloween (pun intended). Initially, it was the day that we celebrated the return of the dead’s spirits – the modern celebration is celebrated with trick or treating, carving pumpkins and dressing as ghosts, witches, mummies and zombies with friends and family. If you’re so lucky to be the one who throws the party, then you better be sure to add some haunt to your house party with our Halloween inspired lighting, effects and props! 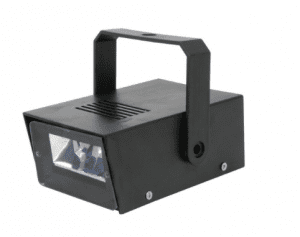 These little strobes pack a mighty punch – making them great for turning your party into something spooky! They are battery-powered, making them ideal for hiding in the corners of your hall or porch – a great way of scaring trick or treaters! These strobes are in a robust ABS casing with a fully adjustable mounting bracket. The back of the unit features a rotary control to adjust the flash rate between 0 and 10 flashes per second.

We have a selection of air-filled figures who want to be invited to your party! All made from tough nylon material, these are self-inflating with an internal fan powered from a 12v mains adapter. LEDs inside the figures illuminate them for further effect. The inflatables are weighted at the base to prevent them toppling over, and ground spikes are included if you are using them outdoors. Each of the figures stands at 4 feet tall! 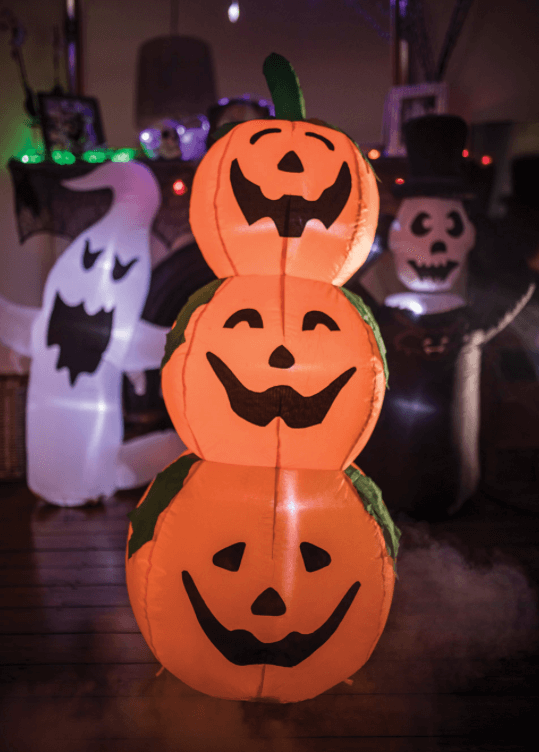 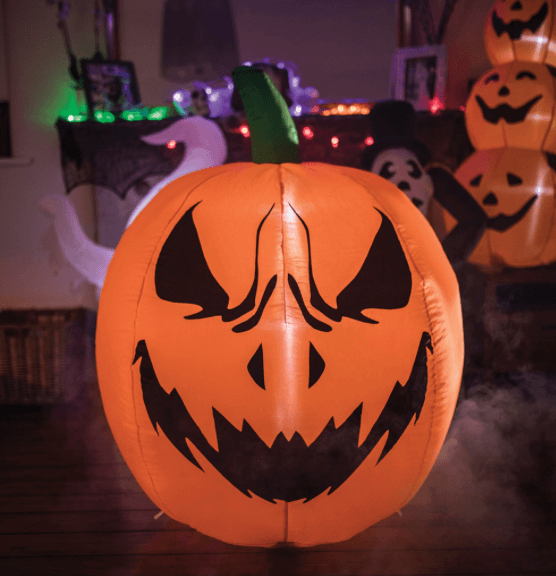 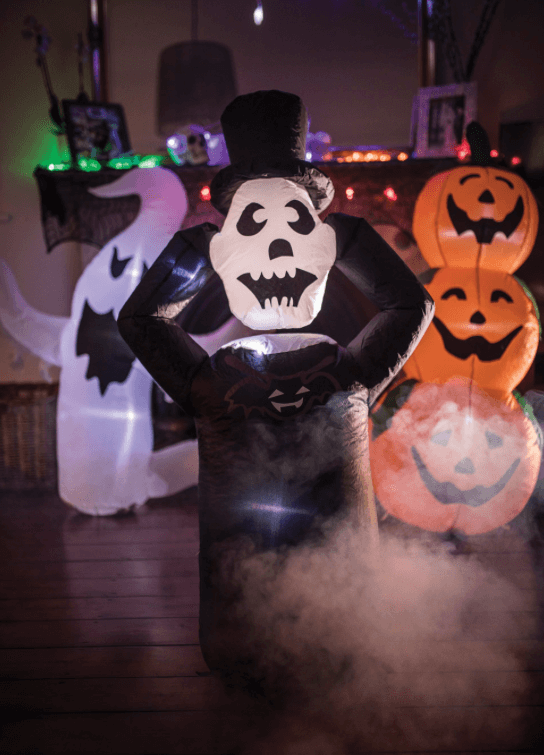 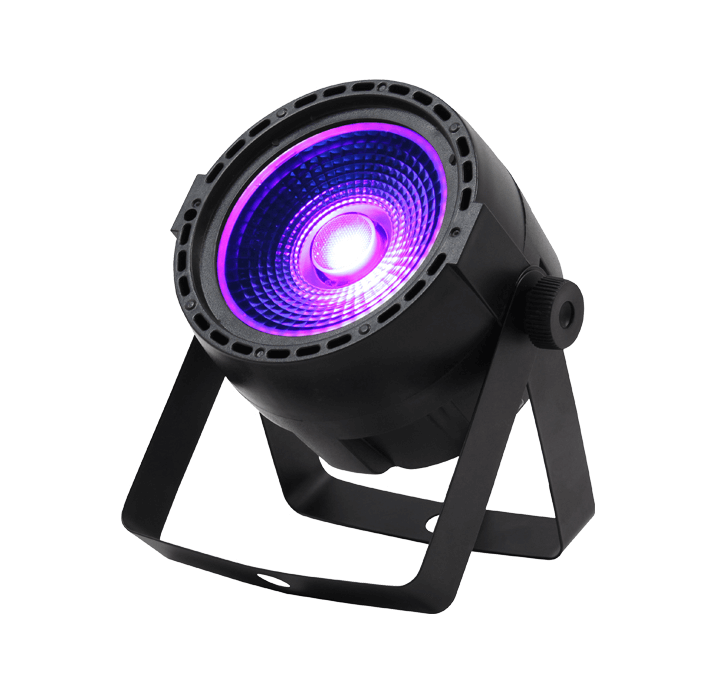 Probably one of the most timeless lighting effects of all time, this micro UV par can,  is ideal for making fluorescent colours and whites really stand out. This MicroPar UV is extremely versatile, thanks to its dual mounting bracket – whether hanging from a stand or placed at an angle on the floor. This UV par can is DMX compatible and has different modes – such as sound to light, dimming and auto. These can also be set to strobe – if you want to add another dimension to the atmosphere! 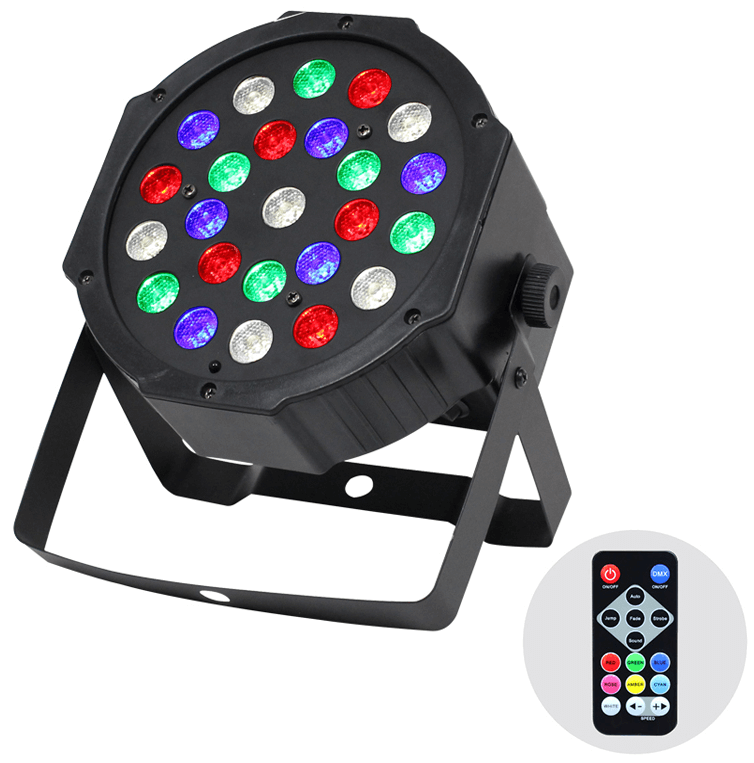 The Equinox Maxi Batt par can is extremely useful – it features a lithium battery to power its 24 x 1 watt LEDs – there are a combination of Red, Green, Blue and White LEDs with colour preset mixing between these – so whether you want to create a graveyard-green or a devilish red – these would be very useful! You don’t need to worry about running mains extensions either, thanks to the battery which runs for as much as 6 hours on a single colour! A charger/mains connection is including for both charging and use. The Maxi Batt comes with a remote control so you can select between single colours, colour changing, fading, auto, sound active and master-slave modes. The bracket included means these can be used with a stand or placed on the floor at any angle you prefer. 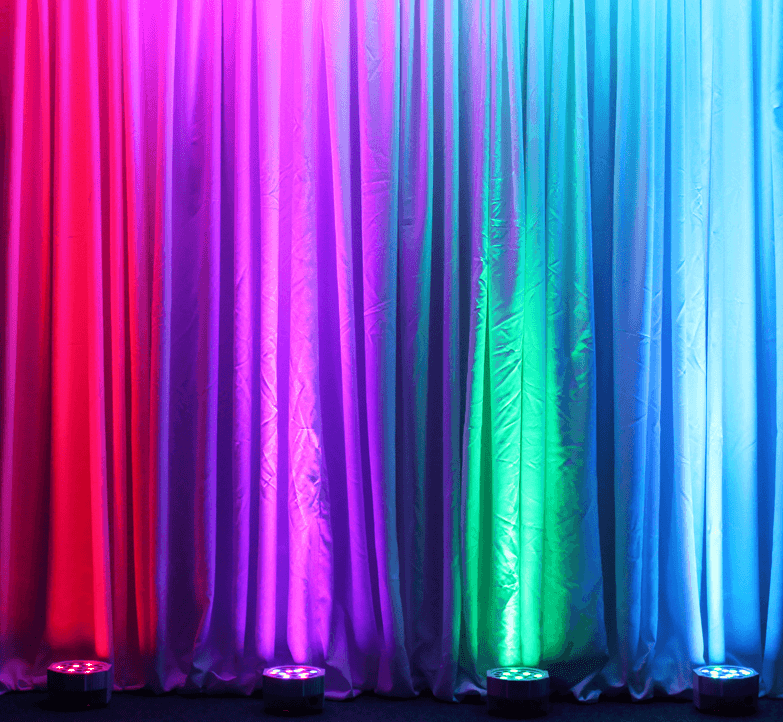 It’s difficult to imagine a Halloween-themed party without a fog lurking in the air. Whether your house is being turned into a post-apocalyptic world or the graveyard routine from the music video; the smoke can be used to add extra atmosphere for a very reasonable price.

The cheapest fog machine available, the Marq Fog 400 smoke machine has 3 built-in orange LEDs to add another dimension to the effect! The Marq Fog 400 comes with an easy to use wired remote, consisting of a single ‘push for smoke’ button. This machine has a heat-up time of just 3 minutes and weighs only 1.7kg – perfect for a living room Halloween bash! 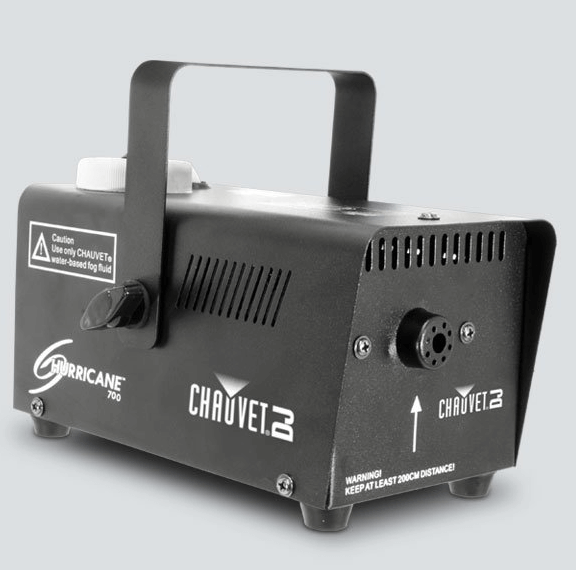 Whether you’re a mobile DJ with the need for a basic fog machine, or if you’re looking to smoke out your friend’s gazebo, the Chauvet Hurricane 700 will be perfect! Offering a high output for its size at 1,500cfm. It comes with a 4 metre wired remote – especially handy for placing far away from the DJ booth – and a 4 minute heat-up time. The Chauvet Hurricane 700 also includes 1 pint of smoke fluid to get you started! 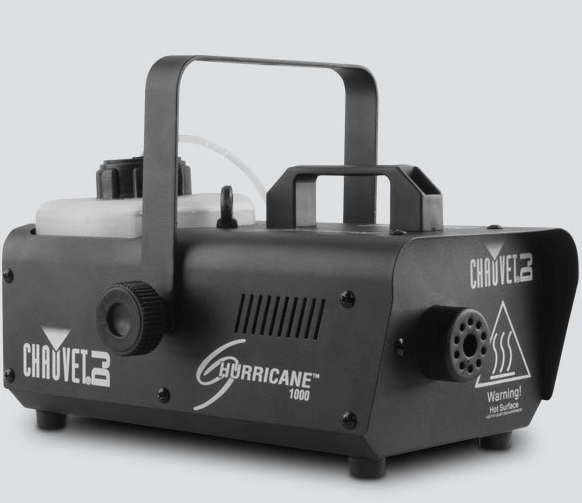 The middle brother of the Chauvet DJ Hurricane smoke machine family, the Hurricane 1000 offers a staggering 10,000 cfm output – enough for large house parties or smaller mobile DJ events. This machine is lightweight given its capability and includes ‘always ready technology’ meaning it’ll be ready to emit smoke with little or no re-heat time. There are actually three ways to control this smoke machine. First is via the onboard ‘push for smoke’ button, the second is a wired remote. The third is a wireless remote system consisting of a transmitter and receiver, making life easy for scaring trick or treaters before you’ve opened the door… 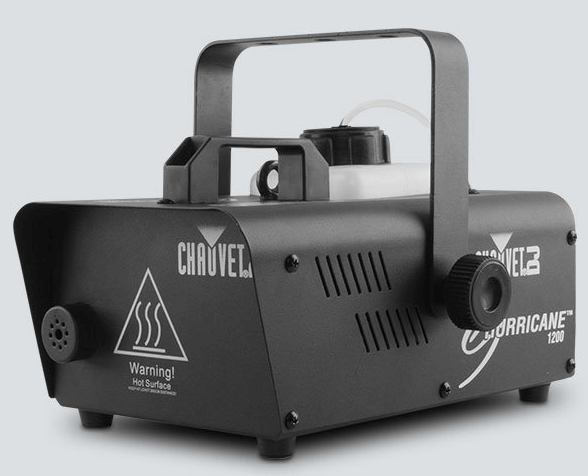 Ok, a little overkill for a house party but a fantastic smoke machine with almost double the output of the Hurricane 1000; The Chauvet DJ Hurricane 1200 is powerful with 18,000 cfm and heats up from cold in just 2 minutes. The Hurricane 1200 comes with a wired remote offering comprehensive controls including a timer with automatic smoke and adjustable interval, intensity and a ‘push for smoke’ button. The Hurricane 1200 has an advanced fluid sensor with an automatic shut off, which prevents the pump from overheating. 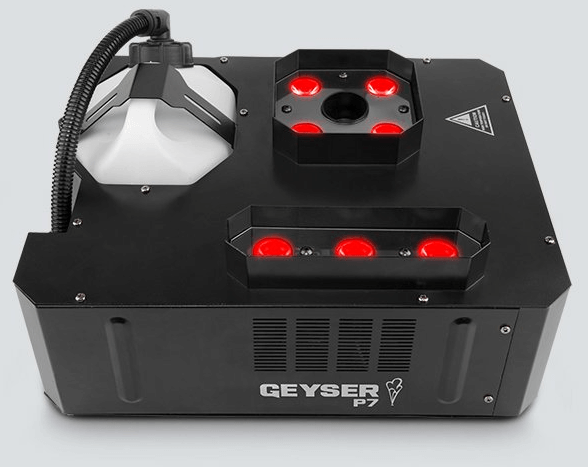 Bring the theme park – festival top effect into your party! The Chauvet DJ Geyser P7 is designed to create wild, instant bursts of fog vertically. These jets of smoke are lit with 7 x 9w LEDs offering any combination of Red Green Blue Amber and Ultraviolet colours. This is divided into two zones of colour for even more versatility! To create this effect with the traditional CO2 would cost quadruple the cost of one Geyser P7! This machine can be controlled via the built-in DMX, or it can be used with the included wireless remote. Each button on the remote can be assigned a smoke jet colour to suit your preference. I’d certainly be using a mysterious green-blue and a fire-breathing red-orange on the remote for Halloween! What’s more is you can mount this upside down, on its side or flat on a floor. 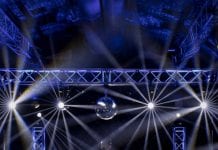 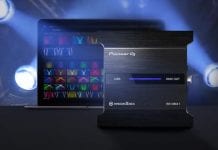