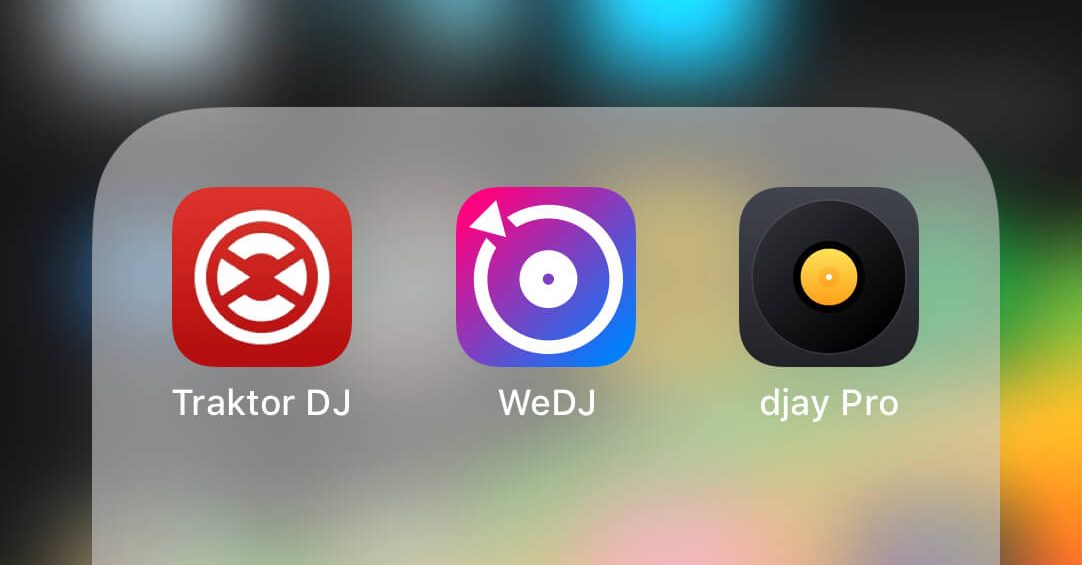 In recent years the Apple iPad has become a dependable tool in creative industries such as design, video and music. Their iPad Pro offers internal storage of up to 256Gb with processors that get faster and faster at such an alarming rate, that theres no point even listing the current specifications in this post. DJ’s can benefit immensely from the power of iPad, as DJ software companies have recognised this, and taken full advantage of their beautiful multi-touch screens, fast processors and in a couple of cases, internet access to bring you a compact, cost effective solution for DJ software. Even Karaoke companies like Singa have developed a professional solution for the pro Karaoke DJ market. In this article I am also going to offer advice on the best iPad DJ controllers; these will allow you to delve deep in the app’s features and gives DJ’s a familiar, responsive experience without the need for a bulky, expensive laptop. The apps mentioned below all follow the basic principles of DJing. This consists of a 2 or 4 deck section to control the songs, transport to navigate music libraries and a mixer section to enable transitions between tracks. These iPad apps are aimed at the entire spectrum of people who DJ; whether you’re a curious beginner with a thirst for music messing or a Pro DJ looking for a feature-packed backup in small form, there is a reason for everyone to jump on the iPad band wagon. 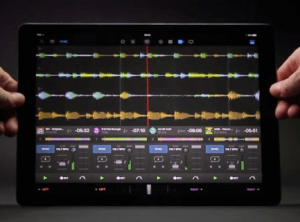 Algoriddim are one of the longest established software DJ companies. Their DJay software is used on many iOS devices around the world and thanks to Spotify premium integration at the moment, you can rock a party with the twenty-something-million tunes in the Spotify repertoire alongside the music you have on your iOS device’s iTunes. Apple themselves have awarded an Apple Design award, due to the heavy optimisation for the latest iPads such as the iPad Pro; bringing a plethora of shortcuts to the various features on board. Unlike its junior app, DJay pro includes professional features such as horizontal and vertical coloured waveforms, live sampler (and drum pads), FX racks and the ability to video mix. The 4-deck view offers a robust quad track solution, where you can sync all four tracks simultaneously. The video mix element is awesome, too, offering dual video streams at 4k from your iPad! Thanks to multitasking, you can quickly open another app without leaving DJay pro – an awesome feature for you to take notes on your set, view a track list or remind yourself of requests on the fly. Split view enhances this further and have another app open and active at the same time. One of my out and out favourite features with DJay is the huge amount of compatible hardware. From small, inexpensive controllers to club flagship models, DJay is compatible with literally heaps of them! You can view DJay Pro on the app store here. 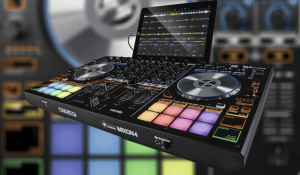 Reloop are one of those companies that make products you want to use. Their feature set combined with their robust build, paired with one of their iPad compatible controllers makes for an awesome rig. The latest in their range of these is the MIXON 4. It can be linked via USB to Mac/PC for control of laptop based software including DJay (and Serato!) but where it really gets interesting is the compatibility with android and iOS devices including iPad. The MIXON 4 includes a lightning cable in the box to connect your iPad whilst simultaneously charging your device. The MIXON 4 also includes its own docking station for iPads of all sizes including its largest iPad Pro (12.9”). The MIXON 4 also features 16 RGB velocity sensitive pads to trigger your cues, loops and samples, as well as slicers and loop rolls. It’s a 4 channel controller, with intuitive transport and navigation knobs to access your library, fx and loop modes and sizes. When talking connectivity, the MIXON 4 comes equipped with XLR and RCA main outputs and 1/4” jack output for the DJ booth. It’s also got capacity to connect a microphone and two pairs of headphones.

Native Instruments take both their software and hardware very seriously. They pride themselves on harmonious integration and deep manipulation of both macro and micro elements of your preparation and performance. The Traktor DJ app enables you to manipulate and touch your music with the hand gestures you’re already familiar with. It comes with a 2 channel mixer and dedicated 3-band EQ and filter sections. Traktor DJ integrates with your iTunes library perfectly, too, recommending songs whilst others are playing based on the key and speed of the track you’re currently playing. The Traktor App also offers in-app purchases for super useful add-ons such as their SuperSlicer; a remixer’s dream! You can slice up your tracks and deconstruct your loops adding a whole new element to your performance. The app itself only costs £9.99 and can be used on lower spec iPads such as iPad mini and iPad 2; as long as its iOS 7.0 or above. What do I love most about the Traktor DJ app? Quite simply is their interface; you don’t necessarily have to *learn* the software; its really intuitive and can be picked up in an instant. The colours and buttons they have used are based off their computer based version of Traktor DJ so for those people using a variant on their laptop will feel at home. Another mega plus for the Traktor DJ app is how much Native Hardware can be used on iOS devices! The Kontrol S2, Kontrol S4, Kontrol Z1 and Audio 6 are all compatible with Traktor DJ (note: some via Apple’s camera kit). Further developments to the app last year also included iCloud syncing! So your beat grid, hot cues, BPM and musical key data is held within iCloud – this is useful as a backup and/or to sync to other iPads without the need to re-analyse your tracks. 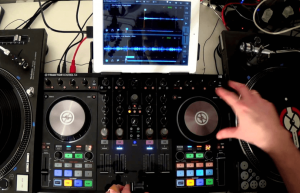 One of the best controllers for Traktor’s DJ iOS app is the Kontrol S4 mk2. Its a portable 4-deck controller which works harmoniously with both computer and iPad variants of the software. It hosts a 24 bit/ 96 kHz sound card and ships with a full version of Traktor for your Mac/PC (normally £89!). Thanks to the fact that Native Instruments make both the app and the Kontrol S4 mk2, there is perfect synergy between the hardware and software. This removes the worry of having to map the different buttons, knobs and faders – the controller will work the moment its connected. The Kontrol S4 mk2 also works as a standalone mixer across all 4 main inputs, so you could use a pair on iPad and another pair connected to other sources such as CDJ’s and turntables. It’s also worth mentioning the cable connected between the iPad and Kontrol S4 will charge your device at the same time, too. The Kontrol S4 mk2 has unique aluminium topped jog wheels to give the Kontrol S4 mk2 a sleek, modern look. Native Instruments have killed it with the layout of this machine; its intuitive and easy to use with both Traktor for Mac/PC and for its iOS counterpart. The Kontrol S4 is also class compliant, meaning it could also be used on other apps, too (cheeky!)….. 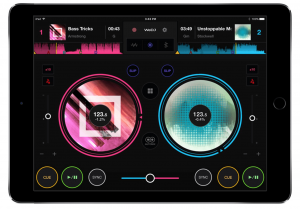 We’ve always loved this four-figure word (perhaps is something to do with the fact it also stands for West End DJ?), but the Pioneer DJ app gives the term its own meaning and provides a valid answer to the iOS app question. The WEDJ app‘s 2 channel interface is bright, colourful and slick. It’s really easy to get around the features such as hot cues, loops, sampler, Pad FX and Combo FX with support for multi touch iPads. You also have the usual control over EQ, tempo and jog wheels for your performance; be it for practice or playing at a gig. The flexible layout means you can choose whether to view the 2 jog wheels of the decks, or view enlarged waveforms in either horizontal or vertical layouts. As previously mentioned, the advanced FX can be accessed either via pad style triggers or via an X/Y pad, where you can assign your desired FX to the x and y axes. One understated element is the track display colour, which changes to suit the colour of the album or song artwork making it easy to identify what’s playing on each deck. It’s got an auto mix feature included on the app, as well as the facility to record your DJ set to either replay in the future, or upload to mix cloud etc. Find the WEDJ app here. 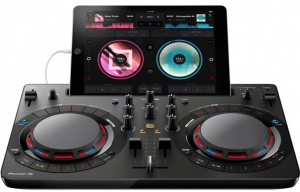 The DDJ-WEGO4 is the 4th generation in its range. It’s kept the same premise since its release back in 2012; to let aspiring DJ’s take their first steps into the world of DJing and provide a compact, backpack friendly controller to use with a plethora of software including Pioneer DJ’s own app; WEDJ for which it works flawlessly. It comes bundled with a licence for Rekordbox DJ (normally £89) and hosts an intuitive layout. The hot cues, samplers, pad FX and loops are all based around the perimeter of each of the jog wheels for easy access. The DDJ-WEGO4 also features an iPad dock at the top of the unit, so there is no need to worry about a separate stand. What do I like the most about the DDJ-Wego4? It’s portability. The unit is 38cm wide, 24cm deep and only 6cm high and weighs in at a featherweight 1.8kg, making it an ideal controller to travel with, if you’re an iPad DJ.

In conclusion, iPads have come on a long, long way since their first inception in performance and capability. If you’re looking to dip your toe in the world of DJing and currently own an iPad, great! These apps can be bought for less than a bucket of fried chicken. You can play around with the app, learn your way around your music collection and then connect one of the controllers mentioned above. If you’re a DJ looking for a portable solution or one that doesn’t involve your massively expensive laptop, an iPad is a great way to get a friendly, reliable and intuitive interface for not-mega-bucks. Or if you need a backup, you can simply reach in your DJ bag and be back running in a moment. Are you thinking of using an iPad setup or using one currently? Let us know in the comments below!