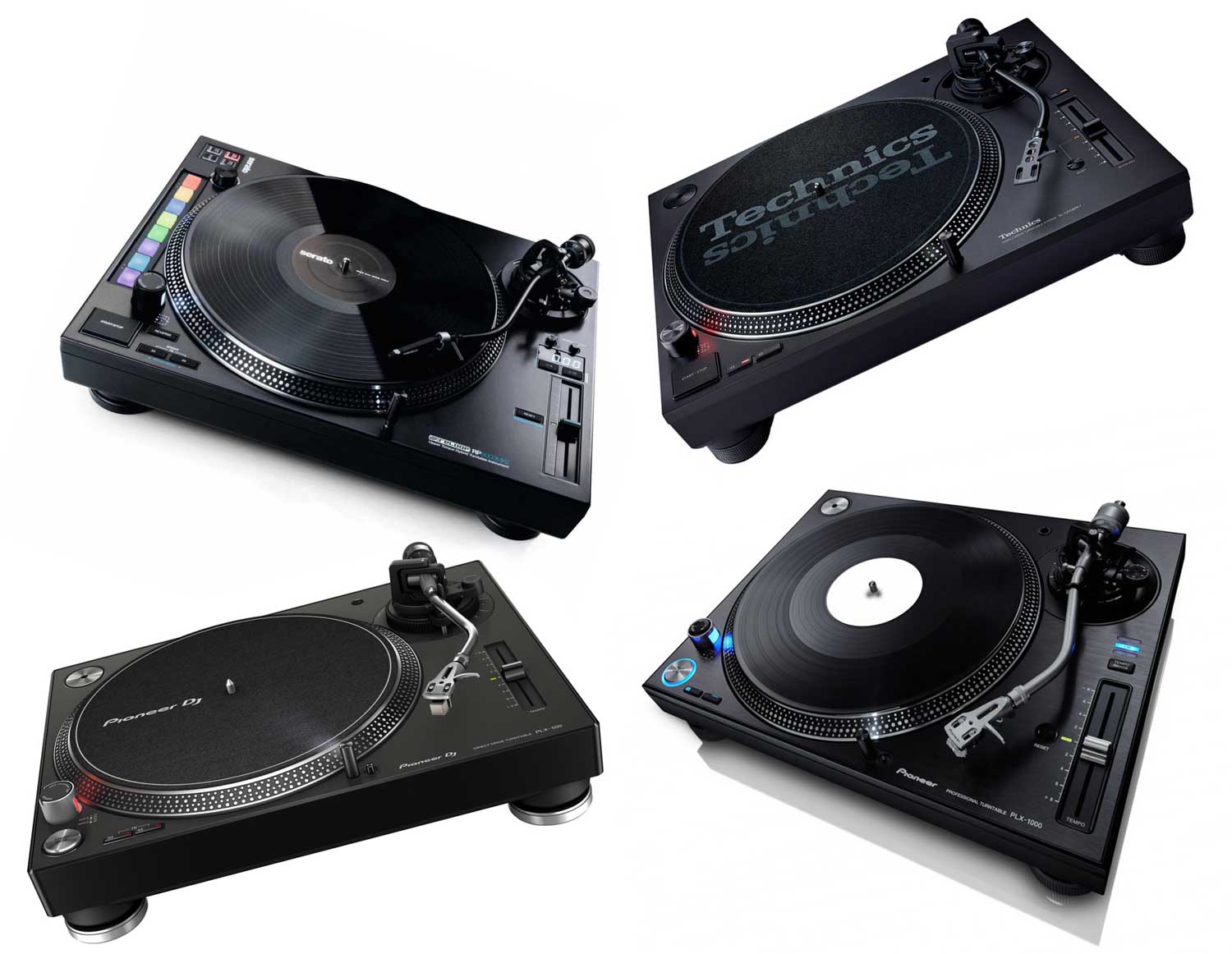 Is finding the best DJ turntable for you still a mission worth undertaking? Yes! After literally several decades of DJing being around, the original ‘tools of the trade’ are still favoured by all DJs, from bedroom beginners to arena playing legends. The traditional DJ setup consists of a pair of turntables and a mixer – a format replicated in other equipment mediums like controllers and CDJs, but nothing feels more organic than a couple of turntables. In principle, the turntables behave just like the ones you would get in a home Hi-Fi, but there are some key differences which will render the home Hi-Fi versions useless for DJing. Heres the essential features of a DJ turntable:

There are two types of motor found on turntables: Belt Drive and Direct Drive. Belt Drive is what it says on the tin; a rubber-band type belt spins the platter from a motor on one side of the turntable. The key problem with this type for DJing is that the belts wear out, meaning they struggle to start and maintain speed after time. The second and best type for DJing is Direct Drive. This is where the platter is turned directly from a magnet-driven motor, guaranteeing torque and speed consistency for years and years to come.

As you can see here on this Project Hifi Turntable, the platter speed is at mercy of a thin rubber belt. It’s great for HiFi but not durable enough for DJ duties. This isn’t the best DJ turntable 2019!

Another feature hardly seen on HiFi turntables. This is an essential tool for beat matching records, and you couldn’t DJ without it. Newer digital pitch technology means many players can change their pitch control range; from 8% to as much as 50%.

After the spinning platter, the tonearm is the item on the turntable with the most movement as this tracks with the cartridge as the record plays, using gyros and sensitive maths equations to function. This will also be damped and suspended to eliminate any unwanted vibrations and feedback. The tonearm can be s-shaped or straight; there’s no right or wrong answer as many scratch performance DJ’s will prefer the shorter, straight tonearm and the club DJ will vote for the s-shaped tonearm for their feel when changing between records.

Another key difference between a HiFi deck and a DJ one is how they are built. DJ turntables are far less delicate (I still wouldn’t throw one out the window, but HiFi decks scare me to look at let alone touch!) with metal being the key material to the chassis and body, to help eliminate feedback vibrations and withstand the rigours of going from gig to gig. Connectivity is also increased with many DJ turntables now offering detachable RCA and power cables, with some also featuring a USB interface inside to make archiving and sampling from your vinyl even easier.

What is there to say about a Technics that hasn’t already been said? Since the 70s. Technics have manufactured no less than 3.5 MILLION (that’s 3,500,000) 1210s which have retained their original formula on their latest version; the SL1210 MK7. This turntable is legendary and has been in every DJ booth worth playing at. I would even go as far to say that if Technics didn’t go on a 10-year hiatus between the previous version and the MK7, the other turntables in this list probably wouldn’t exist! The SL1210 combines the perfect formula of the familiarity of its millions of predecessors, with some features for the 21st century turntable DJ such as detachable signal and power cables, torque adjustment, start/brake speed adjust, LED lights and digital Pitch Range adjustment from 8% to 16% and a reset button that returns speed to 0. The motor on the new Technics SL1210 MK7 is coreless, which combats a turntable audio issue known as ‘cogging’. The lights on the new MK7 can be switched between blue or red; either to suit your DJ booth setup or a handy utility for when you are playing back to back! Sure it isn’t a big list of additional changes – but if you have the best DJ turntable on the market, what more do you need? First impressions of this turntable will immediately give you deja vu; with styling cues heavily influenced by the Technics SL1210 series of turntables. Combine this with the slick Pioneer DJ brushed black finish, the PLX1000 looks at home when parked next to the other Pioneer DJ gear such as the DJM900NXS2 and CDJ2000NXS2. One of the main figures that stand out on this turntable is its high torque rating of 4.5kg/cm, which gets the platter spinning at 33 1/3 within 0.3 seconds. The PLX1000 pitch range has three settings: +/-8%, +/-16% and +/-50%. These are particularly handy for scratch and trick DJs who can use these three settings to get creative in their routines, especially when using the 50% pitch speed. There is also a pitch reset button to lock the deck in 0% – especially handy when recording vinyl for archiving and sampling.

When it comes to the number of features on a turntable, the Reloop RP8000 MK2 wins this competition hands down. Hailed by Reloop as ‘the most advanced DJ turntable ever’ they have a point. The RP8000 MK2 uses an adjustable torque motor and has been influenced by many international turntablists, for maximum feature approval. The RP8000 MK2 has 8 RGB pads to use with Serato DJ Pro (it’s an official accessory) which can be used in no less than 7 Performance modes including a world-first platter play: where you can use performance pads to control the speed of the platter for melodic sequences. There is also a transport section, so you can navigate music on your laptop, load tracks to the deck and trigger instant doubles. There is a bright LCD screen above the pitch fader to display BPM, scale/notes and time elapsed/remaining. There are variable controls for torque and brake speed too, for maximum flexibility. To the rear, the RP8000 shows off its connections – there are more than any other turntable on the market. There are separate phono and line outputs, ground screw and power cable input. There is a USB-B socket to connect the turntable to your laptop, and a further USB-A socket to link two RP8000’s together, reducing the demand for devices connected to your laptop. Known as the baby PLX-1000, the Pioneer DJ PLX-500 is a great DJ turntable for beginner DJs and those looking for some decks on a budget. The PLX-500 uses the shortest possible audio routing from stylus to output to reduce as much distortion as possible. Another handy feature is the switchable line/phono output so that the PLX-500 can be used with something as simple as an audio dock for home HiFi use. Also on this Pioneer DJ turntable is a USB connection which allows you to connect the turntable to your computer for easy digital recording. This is both Mac and PC compatible. The PLX-500 is available in black and white, to suit a range of environments – whether its the DJ booth or your living room! Designed for the needs of professional DJs and nightclubs, the RP7000 MK2 is a rugged and powerful DJ turntable. It’s a more substantial turntable, too weighing in at nearly 12Kg. This makes the turntable more resistant to feedback at higher volume levels compared to its rivals. The RP7000 MK2 has adjustable torque and features a newly developed height-adjustable tonearm. One unique physical element on the turntable is the dual start/stop buttons; this makes it easier to use when using the RP7000 MK2 in a battle format at 90-degree rotation. The digital pitch can be used in three ranges: +/-8%, +/-16% and +/-50% and there are dedicated buttons for reverse mode.

In my humble opinion, it’s never been a better time to buy a pair of DJ turntables. I completely understand the old SL1210 Mk2’s aren’t broken – but if they ever did, it’s either impossible – or expensive at best – to get parts fixed or replaced. All turntables have moving parts, delicate gyros attached to tonearms to play your precious records and read accurate timecodes for DVS. Having the peace of mind parts can be replaced if needed is certainly something I look for when buying this kit. Whether you want a DJ deck with all the bells and whistles, an iconic brand or a beginner setup, there is certainly a pair DJ turntables for you.