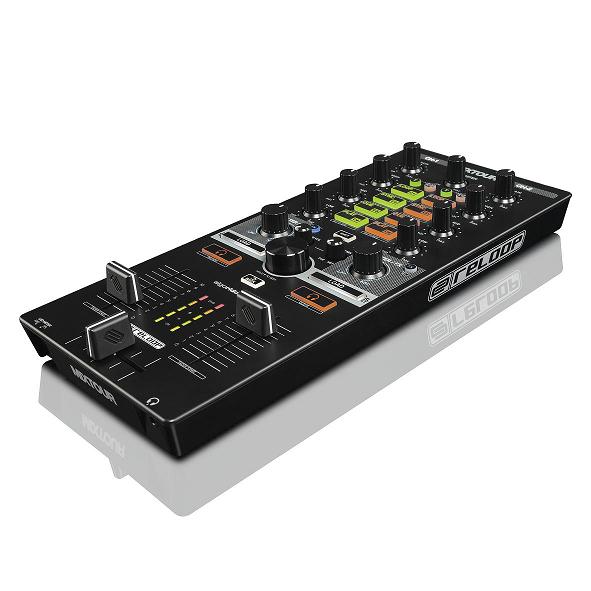 We just got these in and are amazed at the build quality and functionality of the new Reloop MixTour controller at this price.

First, let’s go through what it does.

The MixTour is a compact 2 channel mixer controller with all the basic transport controls you need to DJ with from either a computer, iPhone, iPad or Android device*.

The bottom half is the mixer section with 2 channel faders, crossfader, LED meters and a switch to change between input and output level metering. There are cue select buttons for each channel as well as the headphone socket.

In the middle, you have 2 large filter knobs with effects buttons, the headphone volume and cue mix control to pre-mix in your headphones. The largest control of all is the huge browse knob with push down on it and load buttons for either side.

The top half gives you your mixer EQ and gain controls and your basic transport controls like Play, Cue, Sync and Loop. These have 2 modes, in cue mode they act as 4 cue point buttons. Pressing any of these with the shift button held lets you set the size of the loop as well.

The MixTour has a soundcard built in so you can just plug it in to a set of active speakers or if you’re in a club, to a spare channel on a mixer and you headphones in to the front of it. It’s designed to be used with Algoriddim’s DJay2 appfor iPhone or iPad (lightning connection only and cable included) , if you are going to use it with an iOS  device you will need to use the included power supply. It will work from a USB socket on a computer however the LEDs will be noticeably dimmer. It will work out of the box on a Mac with DJay Pro software or with Traktor once you’ve downloaded mapping files.

Overall as an introductory controller for iPad or iPhone DJing its all you need or perfect as a budget backup controller.

As an introductory offer, the Reloop Mixtour is available for £110 inc vat until the 1st March 2016, after which it will go to it’s normal price of £130, which frankly, is still a bargain.