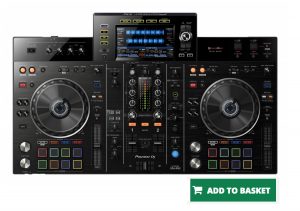 After months of speculation, rumours and some fake images, Pioneer have today launched the XDJ-RX2 player and yes, its still 2 channels.

At first glance, it doesn’t look drastically different to the original one, but there’s so much more to it when you look closer.

Yes, its’ still two channels, however, look at this. The mixer on the XDJ-RX2 is essentially a lightly trimmed DJM450 with the 2 main channels having 3 band EQ, Color FX and Beat FX found on both the DJM450 and DJM900 NXS2. Each channel has switchable inputs to phono / line or the internal USB deck plus there’s a third AUX input with its own gain control. So thats a total of 5 sources connected simultaneously. There are even two dedicated mic inputs with tone control as well.

The decks have been improved too, the XDJ-RX2  jog wheels are slightly larger with a great new feel to them look like they’ve been taken straight off a DDJ controller. The new 16 performance pads have a nice backlit outline and also look like they’ve come off another one of Pioneers’ controllers. The pads can be used to trigger hot cues (now up to 8 per track) , samples, loops and use slip loop and beat jump.

The play and cue buttons are a nice shiny silver, again looking like they’ve been borrowed from the XDJ single players. 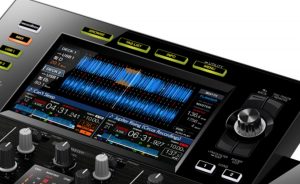 One of the biggest improvements on the XDJ-RX2 is the screen. In fact the whole display section looks like it has come right off a CDJ2000 NXS2. Everything is where it should be, the source selection, browsing wheel surrounded by the navigation buttons and the stunning 7 inch touch screen.

Like the NXS2 range the touch screen gives detailed waveform displays with smooth scrolling and zooming, and with the latest RekordBox 5, multi colour waveforms look great on this.

The touchscreen on the Pioneer XDJ-RX2 also offers track search via an on screen QWERTY keyboard and needle search within the track. When used as controller for RekordBox DJ and the video expansion (both included) you can control transitions and effects on here too.

Even the two USB sockets on the top have the same little folding covers that the CDJ2000 NXS2 has which shows how much detail has gone in to making the XDJ-RX2 as close to a premium system as they could.

Combined with the new RekordBox 5, the Pioneer XDJ-RX2 is also a hugely capable controller, most of the new functions in the software can be controlled natively and for those that can’t, it’s easy to add the DDJ-XP1 for additional control.

At £1529 inc vat, it’s a little bit more than the original but this is nearly half the price of a single CDJ2000 NXS2 and you get a whole system AND the RekordBox license with video.

The new Pioneer XDJ-RX2 is shipping NOW with limited supply.