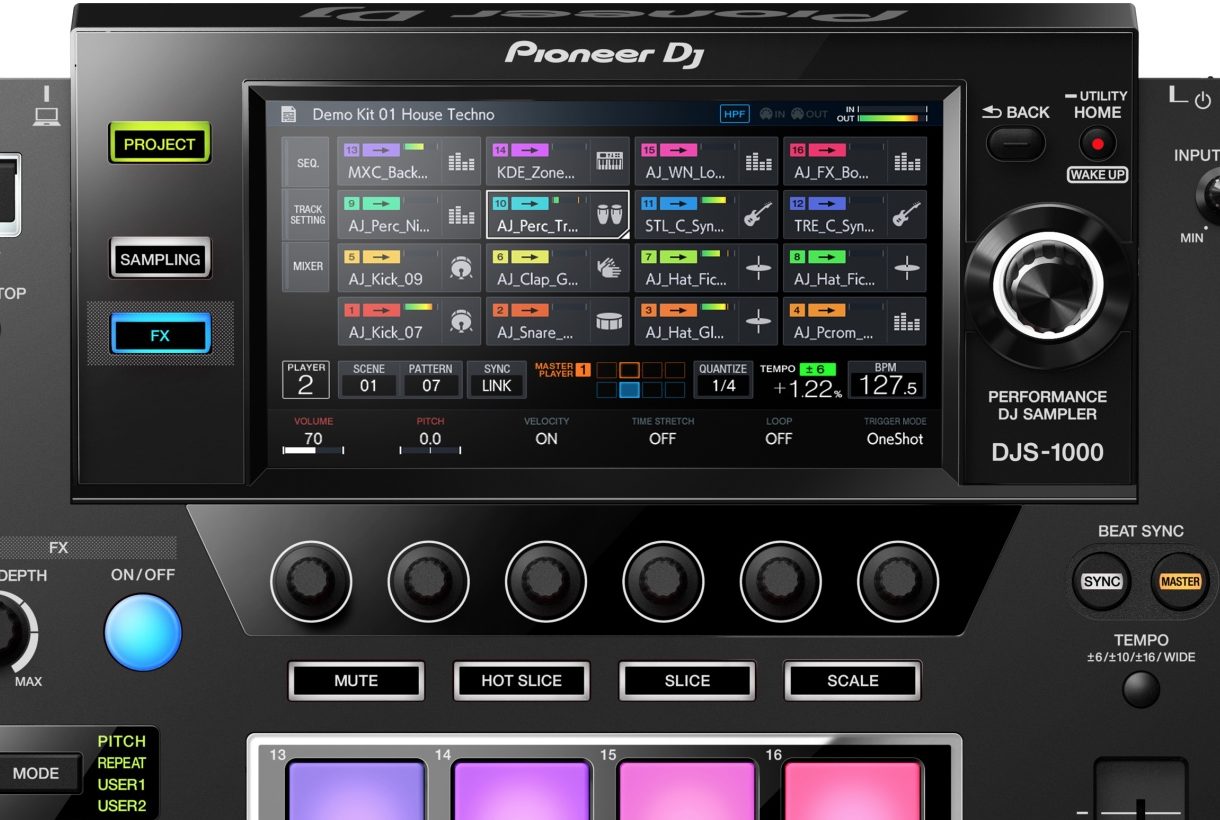 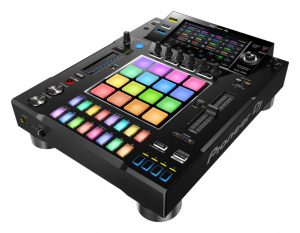 Pioneer DJ have just announced the new DJS-1000 sampler and performance player. Sound like an odd description? You’re right, it’s hard to describe in a couple of words what the DJS-1000 is, does and who it’s for.

What does it do?

The Pioneer DJS-1000 plays back pre-loaded sounds from built in ‘kits’ covering most genres. It will also play samples and loops loaded in via USB or sample from an external source. You can build a track using the on board sequencer and load projects created on the Toraiz SP16 or other samples from a USB storage device.

The 7 inch touch screen lets you see clips  relative to the pads or a sequence view to see a whole pattern at a glance.

It’s laid out like a typical CDJ / XDJ player using the same form factor, same 7 inch touch screen, pitch fader and even play and cue buttons all in the same positions too. So most DJ’s will be able to work their way around the basics straight away.

The central part of the DJS-1000 has 16 performance pads, all RGB, to trigger samples and sounds. Underneath these, across the bottom of the DJS-1000 is the 16 step sequencer for playing your sounds.

The DJS-1000 has a stereo line input (no phono stage here for connecting an older turntable) for sampling. You can record up to 32 seconds of audio for a clip which can be assigned to a pad and will start playing over the existing sequence, in time and looped.

The DJS-1000 includes over 2,500 built in samples from Loopmasters, these are read only and can not be removed or overwritten. It does mean that you can start using the DJS1000 straight out of the box though. There is a free DJS-TSP Project Creator Tool program which allows you to create projects and organise samples for exporting to a USB device. Once on the USB stick, plug it in to a DJS-1000 and load them up straight away.

Once you have your sequence playing you can manually adjust the tempo to sync with any analogue source, theres even ‘nudge’ buttons to essentially pitch bend.

The touch strip control has 4 modes, it can be used as a pitch control to with adjustable range, Repeat will ‘roll’ the playing sample in varying ranges. The other two modes are user assignable for extra control like FX parameters or MIDI settings.

You can use the rotary controls under the screen to adjust the effects parameters and then assign the effect to which track or group of tracks you want. There is a simple ON/OFF button like that found on most Pioneer DJ mixers and a ‘Level / depth’ knob.

There is a 16 step sequencer to create patterns with the samples and loops, all easily done with the multi coloured sequence buttons along the bottom.

Who is it for?

Pioneer have made the DJS-1000 for DJ’s who also produce and perform live. The seasoned producer can keep busy with the sampler and sequencer and most DJ’s will find it easy to just get a beat going or throw some samples in over their existing set.

The idea is that this goes in the booth along side the existing Pioneer DJ setup and all links nicely together, DJ’s will be immediately familiar with the layout and producers will be able to work out the interface very quickly.

The DJS-1000 will link to the standard CDJ2000 NXS2 via LAN to sync your sequence to the playing track or you can link external synths or sequencers using old school MIDI din connections.

So there you have it, the Pioneer DJS-1000 – a player and sampler for performance DJs and Producers alike.

UPDATE: Pioneer have released the DJS-TSP project creator software for Mac and PC to allow preparation of projects and scenes using your computer and exporting them to a USB device for playback. It’s basic but it’s simple to use. Click here for the software.

Resources: You can download the user manual and quickstart guides for the Pioneer DJS-1000 here.