Since 2003, the Xone:92 has been a staple in DJ booths around the world; with its 4 band EQ, dual VCF filters and MIDI capability the 92 has more than held it’s own with no need for an upgrade….Until you hear the Xone 96 has everything you love, plus everything you want.

The Xone:96 is aimed specifically at Performers carrying the DJ moniker. Allen & Heath have kept the popular analogue soul of the Xone:92 – simply adding the highest quality digital connectivity within the Xone:96. When it came to designing the mixer, Allen & Heath took it very seriously. Its predecessor was (and still is!) an undisputed classic in the DJ booth. They knew they had to deliver the exact essence of the 92 with the poise needed for the digital world.  Senior Product Manager, David Morbey explains:

“The launch of Xone:96 marks a highly significant moment for us, stemming as it does from our determination to take account of and act on feedback from the DJ community. The status of Xone:92 as an undisputed classic was something we took very seriously when developing Xone:96. It was clear that we couldn’t afford to lose its essence but also that we should seek to exceed the expectations of those who were pushing us to deliver another cutting-edge mixer. It isn’t overstating the case to say every fader, knob, button and switch has been subject to a forensic level of attention. Xone:96 is the answer to every question we were asked.”

A massive increase in connectivity means that the 96 can handle drum machines, synths, sequencers, FX pedals, digital channels, even X:link devices are now part of the enhanced workflow – in addition to the quad phono/line stages. In short, this thing is a beast! 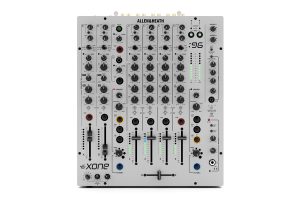 Keep calm, Xone:92 lovers. The Xone:96 still has 4 channel complete-kill EQ’s, dual VCF filters and its legendary tactile layout. We now get to enjoy a 32-Bit USB soundcard within (24 Channels @ 96khz) bridging the gap between the analogue and digital world. The Xone:96 has DUAL USBs for double laptop connectivity, enabling back to back DJ sets with ease. Allen & Heath also make this super easy with the addition of a second CUE section; whilst one DJ is at the controls, the second DJ can preview a dedicated channel of their choice through a second headphone output. Not content with delivering an extensive digital setup, Allen & Heath topped the 96 off with full Traktor certification straight out of the box!

Running a 6:2 channel setup, all 4 of the main faders offer a phono pre-amp long with line level connection and dual USB control. The 2 left hand channels (which were pretty simple on the Xone:92 with Mic/Aux/Return control) now feature a parametric EQ ,as seen on the Play Differently Model 1, and dual sends  – in fact, all six channels feature dual sends! We also look forward to utilising the 4 stereo returns, too! The Xone:96 boasts dual master outputs (Via XLR and 1/4″ TRS) and the luxury of 3 band EQ for the DJ booth output. The Xone:96 also packs a Innofader crossfader which adds yet another string to the bow of the mixer. 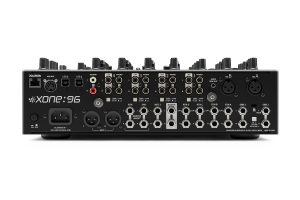 The legendary VCF filters remain, now enhanced with the addition of a new CRUNCH rotary; adding harmonic distortion to your desired channel. The Xone:96 still harnesses MIDI powers with added bonus of now being able to run MIDI via Din or USB, to either of the laptops connected. Also tucked up amongst the plethora of connections, is a 3.5mm audio sync out; a great addition for those wishing to connect to non MIDI synths and drum machines such as Korg’s Volca Range.

The Xone:96 also boasts X:Link capability for devices like the Xone:K2. We are hoping that with this added connectivity we might see something special with Traktor… Imagine a Xone:96, linked via X:link to a pair of Xone:K2 *drools* thats the Traktor DJ booth sorted! 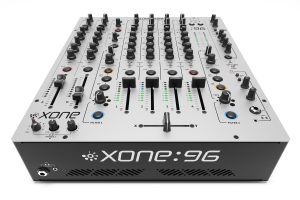 So there you have it ladies and Gentlemen. The new Allen & Heath Xone:96, we’ll be expecting them to land with us in August, priced at £1599.  Click here to place a pre-order